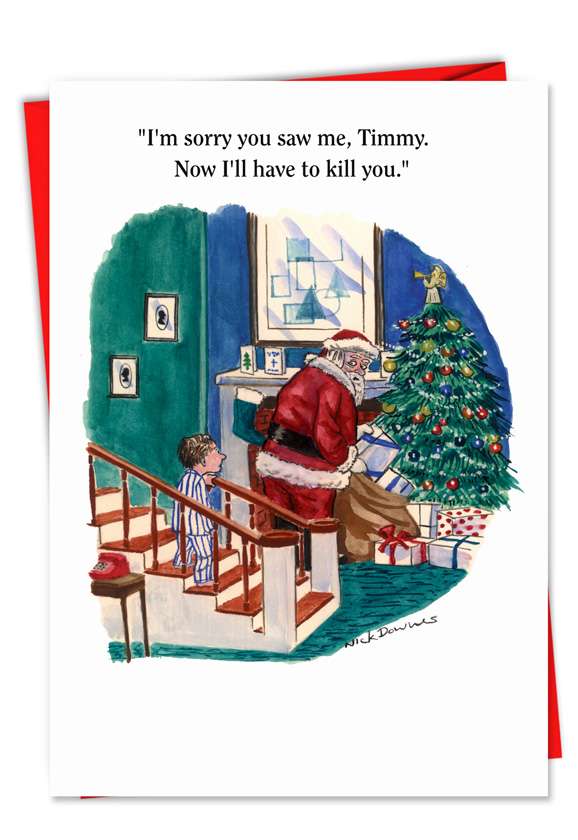 There’s a reason Santa is so secretive when he visits your home. You know why “Nothing was stirring, not even a mouse?” Because those damn mice knew better. They knew to stay away, to not ask stupid questions and to not snoop around. Just stay in bed, enjoy your presents and keep your stupid mouths shut. The big man as a reputation to uphold. He can’t risk his mysterious rep for children who dig too deep and who ask too many freaking questions.

In short, Timmy has to pay.

This hilarious Nick Downes cartoon is one of the shockingly horrible Christmas cards that helps keep your kids in bed on Christmas Eve. Sure, Santa is jolly and generous and all, but his homicidal tendencies are well-documented in The North Pole among his minions. Believe me, his dark side should be fearfully respected. The front reads “I’m sorry you saw me, Timmy. Now I’ll have to kill you.” The inside reads “Season’s Greetings.”

NobleWorks’ creepy Christmas card is not politically correct by any means, but it is a fair warning. Creepy Santa Christmas cards are a fun gift for anyone that has a slightly sick sense of humor. The busy holiday season can present all kinds of annoyances: children hopped up on candy and gifts, jam-packed parking lots, demanding in-laws and crippling societal expectations (I’m looking at you Pinterest and Martha Stewart). A creepy, funny Christmas card is a hilarious choice for anyone with kids. Like many of his other illustrations, this Nick Downes cartoon offers a new, if not somewhat sinister, perspective to an old, familiar story.

This high-quality card is printed on recycled paper stock and is printed here in the good-old U.S. As part of our funny Christmas card collection, this card will bring a little light-hearted cheer (or deep, dark dread) to your family and friends.

PRODUCT REVIEWS
1606848476
Write a Review
Review Summary
Im Sorry Timmy Card   $4.49
4.9
9 Reviews
5
89% (8)
4
11% (1)
3
0% (0)
2
0% (0)
1
0% (0)
100% Recommend this product (9 of 9 responses)
By updateCategoryParent
Hammond, IN
Hilarious
November 28, 2020
This card just cracked me up.
By Jim S.
San Diego, CA
Top Quality Product, but . . .
January 1, 2020
Upon ordering, I never received an email confirmation of the order, nor did I receive an estimate of the delivery date. The cards did arrive before Christmas, but just barely. The up side is that I can use some of them next year. I will use Noble Works again, but I'll be sure to order much earlier.
ProsFairly priced, and (a rarity from many vendors) both the cards and the envelopes were made of durable, high quality paper.
ConsNo emailed confirmation of order and no estimate of delivery date.
By Johnboy813
Palmdale, CA
Santa's tough
December 13, 2019
I have a friend that says he always looks forward to my Christmas Cards as they bring a smile to his face. I have no doubt that this card will bring on that smile.
ProsCustomer service is very helpful.
By Jeff
St Cloud
For a friend with "that" sense of humor
November 18, 2019
This card is perfect for a friend that has, shall we say, a bit of a demented sense of humor. Like many of my friends for example! I have purchased this card in the past and my friends LOVED it!
ProsHilarious is a warped way
ConsNone if you have a bit of a wacky sense of humor.
By mike
philly
really funny card
October 31, 2019
this card is hilarious. my friends and family will love it!
By Leonard R.
Chatham, NJ
Keep The Santa Myth Alive!
December 8, 2018
In an age when everyone thinks they know it all, it was refreshing to find a card which tries to keep the myth of Santa Claus alive for kids by having Santa kill the kid that saw him.
By Hoyt
Austin, Texas
My FAVORITE Christmas card of all time
December 1, 2018
I first found "THE Timmy card" in some funky little shop uptown in Austin about 15-20, maybe more yrs. ago, and immediately bought every one that was there in the rack. After sending out all of those, I couldn't find the card again, not anywhere, and I looked all over, because everyone I sent it to got a major grin out of it.
One buddy loved it so much that he said he go in with me and buy some in bulk directly from the outfit that made them, Noble Works. This was back in the mid-1990's--no Google or Amazon or the like--so as a publisher/printer of the cards, i.e. a wholesaler, Noble Works had no system set up to deal with individuals like me. The smallest order they shipped was something like 5 boxes, each containing something like 20-25 cards, so my buddy and I were making good money and decided, 'What the heck!' I took 3 boxes and he took 2.
Even though I was sending out 50+ holiday cards a year then, I had enough "Timmy" cards to last 3-4 yrs., as I recall. When I finally did use hem up and called about ordering more, I believe the number of boxes required for an order had increased to more than we were up for buying, so I eked out the last of "THE Timmy cards" (which, BTW, I learned when placing my 1st order, was how folks working there at Noble Works referred to this card--as "THE Timmy card--likely due to its popularity).
Not until just a week or 2 ago did it finally occur to me that Noble Works must surely have a Web site these days, so I Googled it, and bingo, sure enough, within a couple of clicks,I was looking at my all-time favorite Christmas card, for sale individually and, what's more, at a lower price than I think I paid before.
A couple of more click, and a box full was headed my away and when it arrived, sure made my day! Right away, I pulled out a card (noticing, incidentally, that I think it's also printed on stouter paper stock, too--something I appreciate after having retired from publishing after 30+ yrs.), and I wrote my 1st Christmas card, which I sent out earlier than I've ever sent one--to my old buddy, of course...who replied yesterday that he was going to be placing his order pronto!
Thanks for keeping my favorite card alive, even if there's not much that you can do for Timmy, unfortunately, now that he's seen Santa.
Seeing "Timmy" again, much less being able to order as many cards as I want, sure has made for Happy Holidays on my end, and for the folks I'll be sending them to. as well.
.
ProsVERY much appeals to my twisted sense of humor, and to the same on the part of my friends and family--in short, funniest damn Christmas card I've ever seen Printed on top-notch paper stock in rich color and detail Easy to order as many cards as the customer wants
ConsNone
By Julie B.
Indiana
This card is awesome for folks with a sense of humor.
December 1, 2018
Love this card!
ProsAwesome card for the right group of folks.
ConsMay not be well received by some.
By Brian
williamstown, NJ
Very funny
November 17, 2018
It’s a quick and to the point card, very funny.

Greeting: Have A Truly Merry Christmas!

Greeting: Jump For Joy! It's Christmas.

Greeting: Another Christmas Is In Sight! Merry Christmas

Greeting: Have Lots Of Fun This Christmas!

Greeting: Hope Your Holidays Are Ex-Cell-Ent!

Greeting: Have A Merry Christmas For Goodness Sake.

Greeting: Have A High Time This Christmas!

Greeting: Have A Bang-Up Christmas!