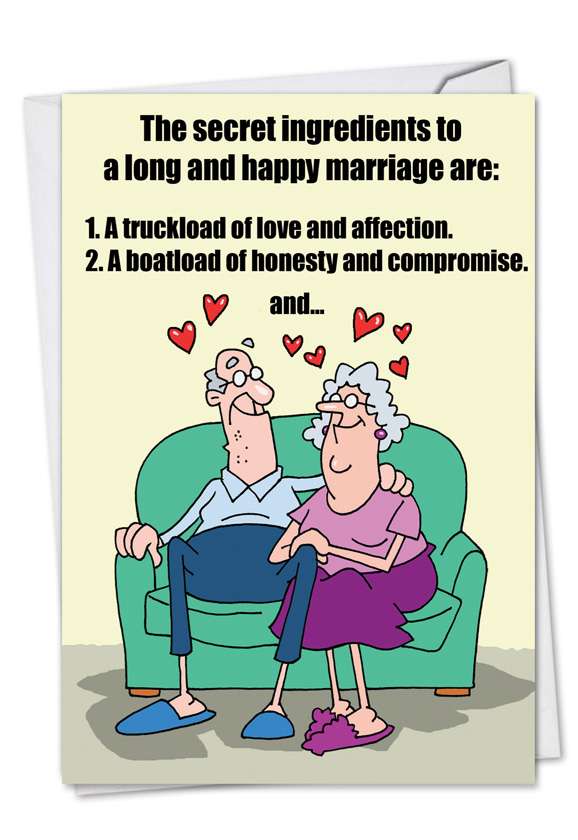 Item #: 9780
3 Reviews
Cover Reads:
The Secret Ingredients To A Long And Happy Marriage Are: 1. A Truckload Of Love And Affection. 2. A Boatload Of Honesty And Compromise. And...
Inside Reads:
3. A Shitload Of Gin And Vodka! Happy Anniversary!

This hilarious anniversary card has a truth bomb inside, ready to blow up a party with laughter.

Perfect for couples that spent years putting up with their significant other, this funny anniversary card celebrates the true secrets to long-lasting love. The Marriage Secrets Anniversary humor card delivers just the right loads of love and affection, honesty and compromise. It's time to pop the corks and wish someone special a Happy Anniversary with this spirited, cheer-loaded cartoon card.

It’s available in regular size and a jumbo size perfect for holding plenty of signatures and sharing at a party. Cap off a toast to the happy couple with this funny anniversary card from NobleWorks Cards.

Tracking is not available when selecting Free USPS First Class shipping.
Orders are shipped from the east coast location.
NOTICE: We no longer ship to the United Kingdom.